As of this date, the historic school is in an extremely deteriorated condition. It is nearly inaccessible on the interior due to the damage to the floor from the weather exposure. BeFree Architecture was able to gain access to the first floor only but was limited in its ability to access all portions of the interior for close inspection. The basement was inaccessible. Because of this inaccessibility, this assessment relies heavily on previous assessments provided by Claybaugh Preservation Architecture (1996) and Susan Richards Johnson and Associates (2005) in association with Donald S. Jack & Associates. Refer to the Appendix for copies of these reports.

All window openings are covered with protective plywood so the condition of the openings could not be fully assessed. The non-historic door on the east is exposed and falling out of the jamb. 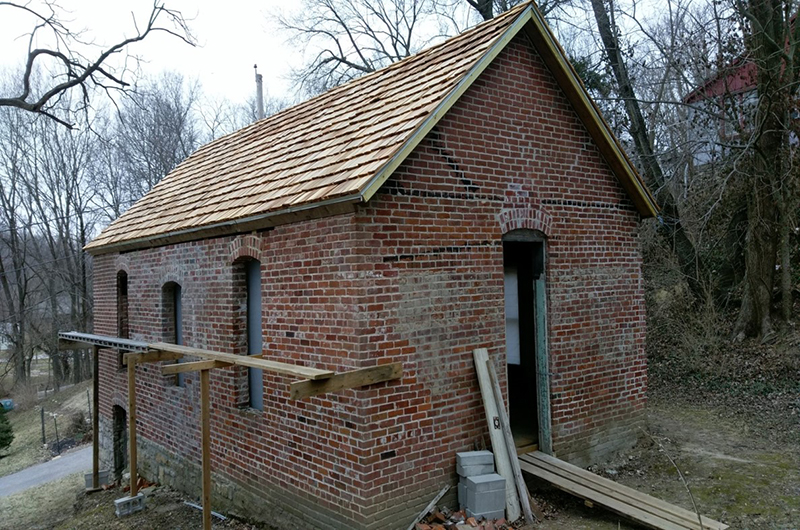 The property that the school sits on is extremely steep with two semi-level areas on the south and east. Some of the grade slopes toward the school. The stone foundation is largely exposed on the north and west. The door to the basement is located on the west and has a small retaining wall adjacent. There is an existing power pole on the north with no apparent power currently running into the building. Also on the north are two existing sets of steps, one concrete which is probably not original, and one comprised of stone slabs that may be orginal. Neither meet Code, nor do they run to the street. They are not safe for public use due to settlement, no landings, and lack of handrails.

There is an existing underground storage structure to the southeast of the school. It is a stone and concrete structure that appears to be in stable
condition. There is no door on the structure, and it is filled with miscellaneous items, including some salvaged brick. It is probable this To the southwest of the school, near the property line, is a stone retaining wall. 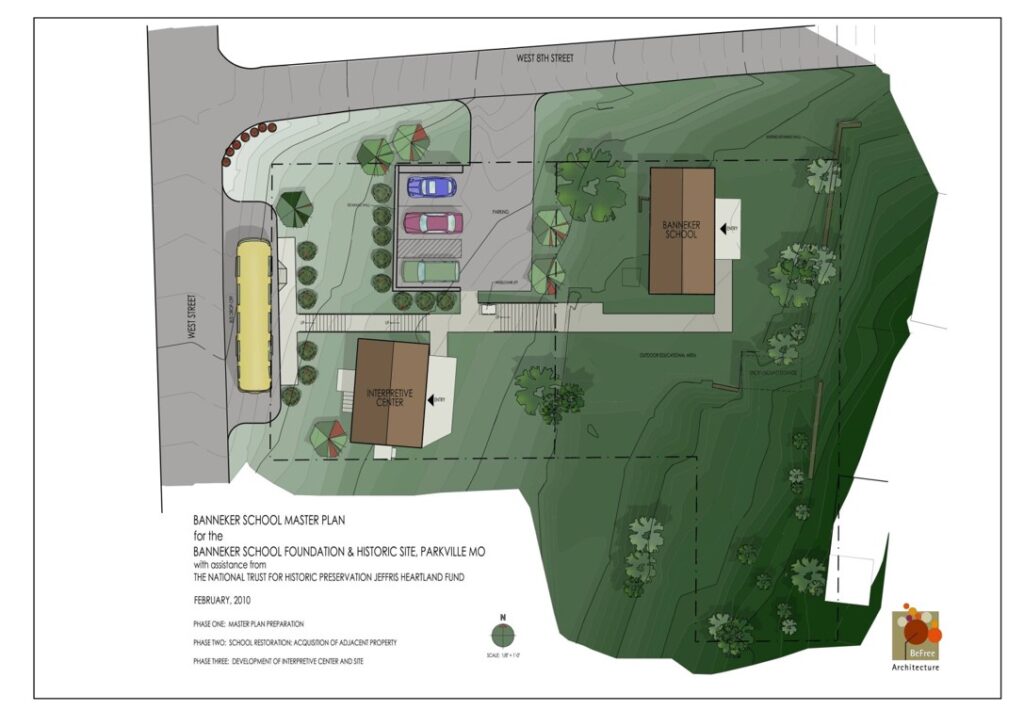 The building is constructed of a double wythe brick wall in a Flemish bond resting on an 18” stone foundation. In the recent past, the addition on the south was removed as well as a chimney on the west side. Two non-original window openings on the west were infilled and the three original openings were restored. It is evident on the west elevation where stone and brick were replaced. The stone does not match the original exactly but is a close match. The infill brick was not reinstalled following the Flemish bond pattern and the mortar does not match the original in color or texture.

All original openings are intact. On the east elevation, a new door was added at one of the window openings and still remains. All openings are covered with plywood with the exception of the non-original door. The metal roof was added in the recent past. The eaves and fascia are in a very deteriorated condition, with several large gaps where the fascia is missing completely. As such, the interior is exposed to the weather.

The brick and stone on the north elevation are in stable condition. The hole where the stove pipe would have come through the wall has been infilled. There is exposed conduit on the exterior of the building where the power probably entered the school at one point. The eave appears in decent shape and should be salvageable.

The West elevation has had the three original window openings restored, two non-historic windows closed up, and the non-historic chimney removed. There is significant damage to the fascia and eave; it is completely missing for several feet allowing the elements to enter the school. The brick is in decent shape for the most part. Where the chimney was removed, some of the brick face has spalled off. Starting above the door to the basement and extending to the south of the northern window, it is apparent that some repointing was done as the mortar color does not match the rest of the elevation. It appears that the northern portion of this elevation has some type of paint coating. A crack was noted at the northern window sill.

The stone appears to be in good shape where exposed. There is evidence of soil to the southern end indicating that the grade may be sloping towards the school. The condition of the door to the basement could not be assessed due to the plywood currently covering the opening. From the previous assessments it is believed that the original door may be in tact in this opening.

This elevation has significant damage to the brick. The brick under the southern window is spalling and loose in places. The brick at the door that was cut-in when the school was converted to a residence is literally falling out towards the bottom of the jambs. The brick at the base of wall at the southeast corner is also very loose. There is apparent repointing that was performed at the southeast corner in recent past, it appears that inappropriate mortar was used, and a crack has formed in the brick just north of this corner most likely caused by inappropriate mortar hardness. The stone foundation is not exposed on this elevation. Its condition cannot be assessed from the exterior. The eave and fascia are also very deteriorated and missing in places.

The south elevation still shows evidence of the kitchen addition that was removed. There are tar stains from the addition’s roof, and some plaster still remains from what would have been the finish for the kitchen. There is also a wood rim board that exists from where the old roof tied into the existing school. At the base are significant signs of soil which indicates that the drainage and grade in this area requires attention. Upon inspection of the building, it was also noted that immediately outside the original entrance into the school, the ground is extremely soft and depressed. This would indicate when the basement that was under the kitchen addition was removed it was not property backfilled. There are loose bricks located under the door threshold. The mortar joints differ in color between the lower and upper sections of the gabled end. This could be from the addition of plaster to the lower section, or there was inappropriate repointing done in the past.

The interior has suffered from years of neglect and exposure to the elements. The floor has several holes. There is evidence of termite damage as well as wood rot in the floor joists. The west side of the roof is currently supported by shoring as most of the joists on this end have rotted beyond the ability to carry the roof load. In several cases, the joists no longer reach the bearing plate on the wall. All remnants from when the school was converted to a house have been removed, but there is evidence where walls were removed and where the added fireplace was removed.

The ceiling joists appear to be original and suffer from the same deterioration at the ends as the roof joists. Evidence of plaster lath is evident although no ceiling plaster remains. As noted in the building exterior section, the brick walls have suffered from inappropriate repointing and years of neglect. There is no significant bowing or specific structural concerns at this time, but given some evident cracking and spalling on the exterior, the walls need to be addressed in the near future. 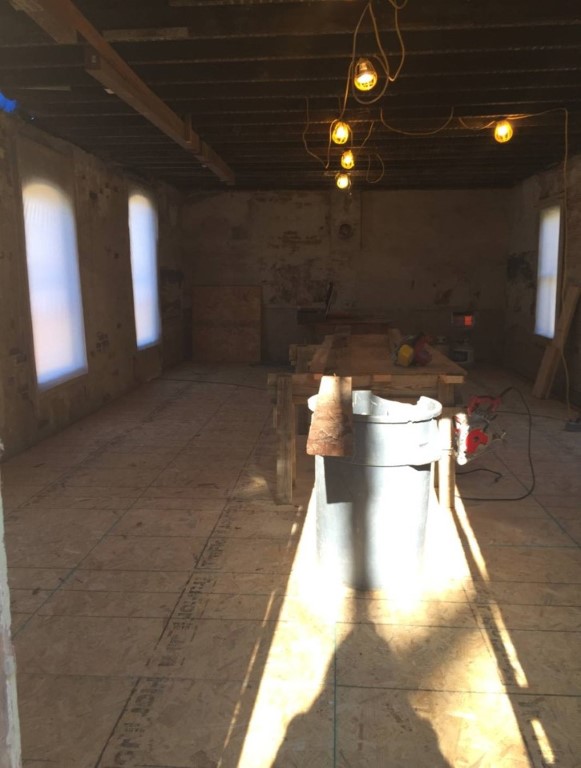 The north interior wall still has a small portion of the existing wood wainscot. The hole from the old stove pipe still exists as well. Some plaster remains, but given the fact that the brick needs to be repointed on both the interior and exterior, it should be removed.

The west interior had a masonry parge coating added at some point in the recent past. Very little plaster remains on this elevation. Because of the parge coating, it is not clear what condition the brick is in. Similar to the east elevation, evidence of the original painted chalkboard still exists on the northern portion of the wall. There are no windows in the window openings, however, two windows are located inside that presumably once occupied two of the three window openings. No window trim remains.

The south interior is where the original door into the school is located. The original door frame and some trim remain intact. The original door is located on site and will require repair but should be able to be reused. The transom that existed above the door no longer exists. Some plaster also remains on this wall, but as stated previously, it is necessary to remove it to repoint the brick wall to protect its structural integrity.

BeFree Architecture did not seek the expertise of a Structural Engineer, it was pretty obvious from the past reports and the on-site inspection that there is significant structural damage. Generally, the floor and roof framing are structurally unsound. As noted previously, the roof rafters have rotted to the point that shoring had to be installed to support the west side. The floor joists have significant termite and water damage at the bearing ends. The foundation appears to be holding its own. Where it is exposed on the north and west, the exterior stone appears in decent shape. As noted in previous reports, there apparently are some areas of concern on the east and south that will need to be addressed.

The City of Parkville has adopted the 2006 International Building Code (IBC). Under the IBC, the restored school will be considered an Assembly occupancy (A-3). It is not anticipated that many alterations will be needed to bring the structure up to current codes as it is such a small structure that will have few restrictions from the code because of its size. The existing school does not meet the American’s With Disabilities Act (ADA) currently because of the entrance on the south which is not at grade. This can be easily addressed during the restoration, however, the site presents the most significant issues with meeting accessibility given the steep slopes from the public right-of-way to the school. This issue will be addressed in the Recommendations section of this document. The Foundation has the first right of refusal on purchasing the property to the west of the school. Because of the proximity, it is included in this document as a viable future Interpretive Center for the Comprehensive Site Plan. Similar to the school property, the west property has very steep grades. Currently, the residence is a rental property. It is a simple wood-frame rectangular structure, approximately 565 gross square feet. The foundation is constructed of concrete masonry units. It has a crawl space. The building is clad in wood siding and has a composite shingle roof.

On the west, the main entrance is accessed by a wooden stair. On the south is another exterior door. On the east is a low-level wooden deck with a sliding door to the interior. There is a gravel drive coming off of 8th Street. BeFree Architecture was not able to obtain access to the interior.

The building does not currently have any power. There are remnants of electrical conduit on the interior and exterior. Because the basement was inaccessible, it is unclear whether an electrical panel exists. It is also unclear whether the existing furnace installed when the school was used as a residence still exists in the basement. There is no evidence of any ductwork or registers on the first floor. It appears that the plumbing was completely removed from the first floor. Again, it is uncertain whether any plumbing remains in the basement. If any sewer lines are still in place around the perimeter, these will be uncovered at such time as the foundation is excavated and can be removed at that time.

Help Us Restore the School